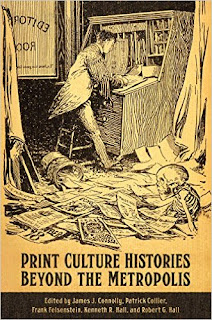 Bringing together leading scholars of literature, history, library studies, and communications, Print Culture Histories Beyond the Metropolis rejects the idea that print culture necessarily spreads outwards from capitals and cosmopolitan cities and focuses attention to how the residents of smaller cities, provincial districts, rural settings, and colonial outposts have produced, disseminated, and read print materials.

Too often print media has been represented as an engine of metropolitan modernity. Rather than being the passive recipients of print culture generated in city centres, the inhabitants of provinces and colonies have acted independently, as jobbing printers in provincial Britain, black newspaper proprietors in the West Indies, and library patrons in “Middletown,” Indiana, to mention a few examples. This important new book gives us a sophisticated account of how printed materials circulated, a more precise sense of their impact, and a fuller of understanding of how local contexts shaped reading experiences.

Part I: Circulation
Non-Metropolitan Printing and Business in Britain and Ireland between the Sixteenth and Eighteenth Centuries
By James Raven
“I have hitherto been entirely upon the borrowing hand”: The Acquisition and Circulation of Books in Early Eighteenth-Century Dissenting Academies
By Kyle Roberts
The 18th- and Early 19th-Century Evolution of Indian Print Culture and Knowledge Networks in Calcutta and Madras
By Kenneth R. Hall
Beyond the Market and the City: The Informal Dissemination of Reading Material During the American Civil War
By Ronald J. Zboray and Mary Saracino Zboray
Cosmopolitan Ideals, Local Loyalties, and Print Culture: The Career of George Chandler Bragdon In Upstate New York
By Joan Shelley Rubin
What Travels? The Movement of Movements; or, Ephemeral Bibelots from Paris to Lansing, with Love
By Brad Evans
Circum-Atlantic Print Circuits and Internationalism from the Peripheries in the Interwar Era
By Lara Putnam
Part II: Place
At the Dawn of the Information Age: Reading and the Working Classes in Ashton-under-Lyne, 1830–1850
By Robert Hall
Uneasy Occupancy: Sarah Grand, The Beth Book and a Colonial Reader
By Lydia Wevers
Alger, Fosdick, and Stratemeyer in the Heartland: Crossover Reading in Muncie, Indiana, 1891–1902
By Joel Shrock
Romance in the Province: Reading German Novels in Middletown, USA
By Lynne Tatlock
Print Culture and Cosmopolitan Trends in 1890s Muncie, Indiana
By Frank Felsenstein
Zones of Connection: Common Reading in a Regional Australian Library
By Julieanne Lamond
Organized Print: Clara Steen and Institutional Sites of Reading and Writing in the American Midwest, 1895–1920
By Christine Pawley
Публикувано от васил загоров в 0:31 ч.